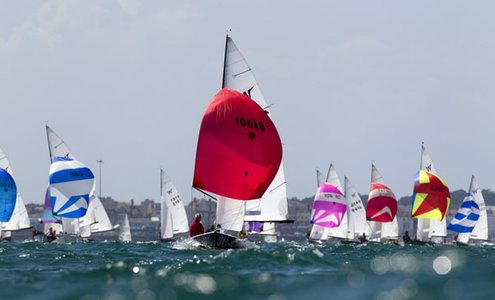 On Olympic courses, reaching with the spinnaker is very important. On the standard Olympic course there are two reaches and one run. You seem to lose very little when you are dead before the wind by setting a spinnaker that is designed for reaching, because very few people sail truly dead before the wind and when the spinnaker is set it often pays to gybe downwind. In this way you have the wind on the quarter instead of dead astern which has the effect of bringing the apparent wind further ahead, which makes the spinnaker much more efficient and of course, increases the boat speed enormously.

The two adjustable controls are pole height and guy tension. Set the spinnaker pole so that both clews are horizontal, raise the pole height in stronger winds and lower it in lighter winds, then the luff should break in the middle first. The fairlead position depends very much on the class concerned. Example - Fireball, 505 and F15 should have them as far aft as possible in order to keep the slot between the spinnaker and mainsail as open as possible. The GP14 and Merlin Rocket, with smaller spinnakers and less overlap require a fairlead positioned halfway along the side deck. The spinnaker guy should be cleated level with the shroud for constant legal trimming by the crew, this also helps stop the pole from skying in strong winds. Spectra spinnaker sheets are essential for minimum stretch. Tapered sheets are an advantage, especially in lighter airs. Alternatively, a second set of smaller diameter will let the spinnaker fly better in light winds.

The spinnaker pole should be of maximum length allowed by your class rules and set as near horizontally as possible to obtain maximum projection and air flow between the sails. In classes where the spinnaker pole is long, such as the 505 and boats with bendy rigs, like the Fireball, it is essential to pre-bend the mast when reaching, otherwise pressure from the spinnaker pole will invert the most and make the entry of the main far to full, which in turn will close the slot between the main and spinnaker.

To help increase the slot, the spinnaker should never be hoisted to the halyard exit point. Around 4" of halyard short of full hoist is usual. When the wind is forward of the beam set the pole 2" off the jib luff. If it touches it will wear a hole in the jib luff and may break your spinnaker pole.

Constant trimming of the spinnaker Is critical, easing the leeward sheet and coaxing the guy to weather until the luff is just breaking. As speed increases the spinnaker needs to be sheeted in harder due to the apparent wind moving forward. In stronger winds gradually raise the pole as this effectively flattens the head of the sail, thus reducing heeling movement. It is also essential to ease the kicking strap, When the kicking strap is completely eased and the top of the main is twisted off and still you are over powered, pull the cunningham down hard. This brings the fullness forward, bends the mast and flattens the mainsall. At this stage if you still cannot lay the mark, take the kite down, and buy a new Pinnell & Bax small spinnaker.

As when reaching, the spinnaker should never be hoisted to maximum height. It will pay to lower the pole by 3-4" from your reaching height in the same wind conditions You will find the pole height range can vary as much as 18" from light air running to heavy air reaching.

The spinnaker pole should be trimmed to windward all the time. As a guide to how far round the pole can come, it is roughly a continuation of the line of the main boom (less in light airs).

In the lightest of airs a clean dry spinnaker will out-perform a salt-caked, and therefore damp and heavy spinnaker.